What goes down in the sea returns back to the surface.. Believe it?
All of us know about the titanic story. Have you ever wondered that how many ships have missed their destinations and the lost lives sleeping dead, all alone in the lap of tremendously unfathomable oceans across the whole world? Think of all the people who died without saying even a little good-bye to their loved ones.

There was a man who could get across his message to his loved ones even in the face of death and the face of a storm. Though, his message was delivered after a gap of 76 years later.

H.E. Hillbrick sailing on board on SS Stanthnaver, a British Royal Mail Ship, preordained to carry people from England to Australia and vice-versa in the 1940s. The Ship got trapped in a flood in the middle of the sea. Death was unavoidable. Mr. Hillbrick, left helpless, tossed a note in a bottle in the sea hoping his message would get delivered to his family. 76 years later his wish came true when the message in the bottle was found in New Zealand by Geoff Flood while he was taking a leisure walk along a beach.
The local media was told, by Geoff, “As I picked it up and started looking, I could see it was an old envelope with P & O on it and I thought this might be something special. There was a bit of mad panic to carefully extract it. I carefully cut a couple of bits of wire and quietly wound it up with the bits of wire so we didn’t damage it. Who knows where it’s been. How many times around the world, you just wouldn’t know, would you?”

And guess what the note read! 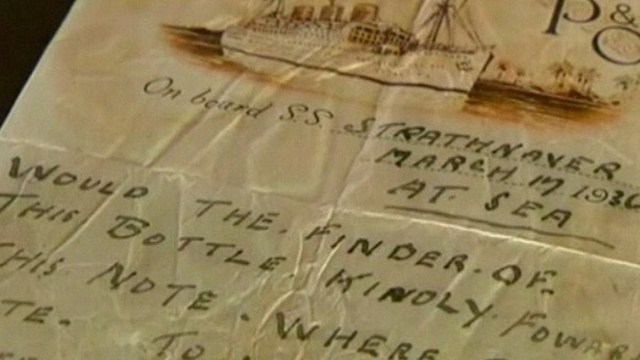 It said; “At sea. Would the finder of this bottle kindly forward this note, where found, date, to underneath address.”

Peter feels huge gratitude for Geoff for giving him this most precious memory of his grandfather. A note written by his grandfather himself. Peter has donated the bottle to Maritime Institute, New Zealand.

Peter told the local media, “The only connection I have with Grandfather is now that bottle. That’s about all. So, it’s a fascinating story.”

The average Bugatti customer has about 84 cars, 3 jets and...

The Vela Incident: Unidentified “double flash” of light that no one...

Cats can get sick or die from eating chocolate.

View the Earth as seen from the International Space Station

76 Years old message delivered from the sea in a Bottle!!

Bill Gates admitted the Control-Alt-Delete command was a mistake.

23% of the couples who meet through online dating end up...

Swansons couple managed to ride the largest tsunami in history with...